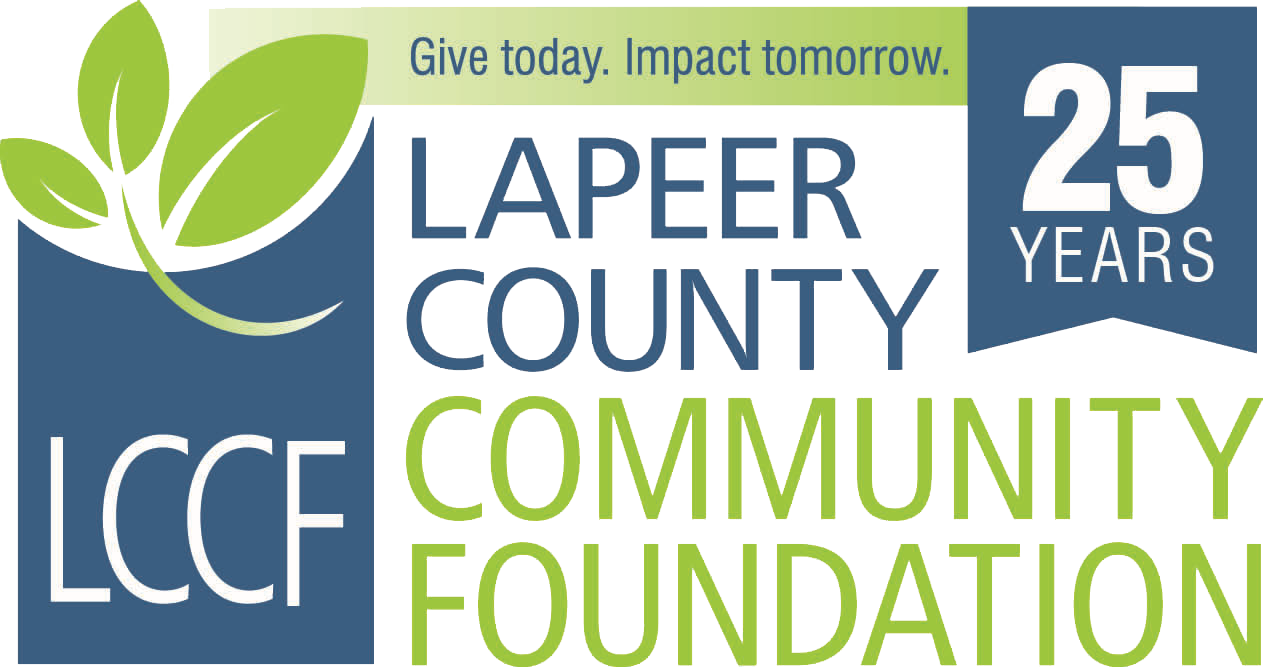 The Lapeer County Community Foundation, henceforth known as the Foundation, builds and manages permanent endowment funds from a wide variety of donors to provide grants that enhance the quality of life in Lapeer County, now and for future generations.

Various types of permanent endowment funds, often referred to simply as “funds,” are entrusted to the Foundation by donors throughout Lapeer County. The Foundation invests and manages these funds with the goal of increasing their principal and returning part of the earnings to the community through grant making.

Donors establish designated funds for a wide variety of purposes, such as providing scholarships, benefiting specific charities, or supporting a particular purpose. Grants from designated funds are awarded considering input from the donor(s) or a committee which advises the fund.
Discretionary funds are earmarked for an area of philanthropic interest (e.g., the arts, human services, or environment), or created for unrestricted grantmaking purposes. In the case of area of interest and unrestricted funds, the donor entrusts the Foundation with the task of awarding grants that address current or emerging community needs.

For fund representatives with Donor-Advised Funds only. Please complete the Request Form to submit grant requests.

The Foundation funds charitable organizations that are able to demonstrate projects planned with respect to the community’s opportunities and needs.

The Foundation gives priority to programs that:

Eligibility: The Foundation welcomes grant requests from organizations in and/or serving Lapeer County having recognition under Section 501(c)(3) of the Internal Revenue Code, educational institutions and governmental entities.

Guidelines: Detailed funding priority information for specific funds is available by contacting the Foundation office. Grants from unrestricted funds are made in the areas of education, arts and culture, the environment, health care, human services, recreation and other project topics.

Preference is given to projects that:

Other general policies and considerations:

Organizations interested in applying are strongly encouraged to discuss their project with the Executive Director prior to submitting an application.  This can help determine if the project meets the basic eligibility criteria and is consistent with the Foundation’s program interests. Foundation staff cannot assess or comment on an applicant’s chances for approval. The Foundation reserves the right to request additional information about the organization, the project, and added financial details.

Applications for grants are accepted at any time. Application forms are available by contacting the Foundation office or can be found on the Foundation website at: www.lapeercountycf.org.  Applications are fillable form templates.  Potential applicants are encouraged to contact the Foundation Executive Director for further information or questions. The Grant Review Committee meets on the second Monday of January, March, May, July, September, and November. To be considered for funding, applications must be received by 5:00 p.m. on the 15th day of the preceding month (December, February, April, June, August, October).  Awards will be announced the second Wednesday of the month following the Grant Review Committee meeting. Grants will be awarded six (6) times per year.

*Application received after February 15th would not be considered until May

Applications will not be accepted after the date and time specified regardless of postmark date. Faxed or emailed applications cannot be considered. Specific application deadlines may be announced for particular funds or through Requests for Proposals.

Each application will be reviewed when all application information has been received. Members of the Grant Review Committee and/or staff for the Foundation may conduct a site visitation and/or ask to meet with or interview representatives of the applicant organization.

Grant applications shall be submitted sufficiently in advance to provide Foundation staff and the Grant Review Committee time to completely review the funding request. Any circumstances that require consideration of expedited review must be explained in the proposal.

Upon submission, the application and accompanying materials become the property of the LCCF and will be used as deemed appropriate by the Foundation. They may be reviewed with community planning agencies and other individuals and organizations as LCCF assesses the project and potential community impact. The information may also be shared with other foundations and funding sources which call upon LCCF for information about community projects.

Applicants with outstanding/late Project/Program final reports for previous grants may not be considered for one (1) year after the final report has been submitted and any unused funds returned to the Foundation.

Grant Requests can be mailed to or dropped off at :